“In other countries, over the years, people recognized places of power. Sometimes it would be a natural formation, sometimes it would just be a place that was, somehow, special. They knew that something was happening there…in the USA, people still get the call, or some of them, and they feel themselves being called to it from the transcendent void, and they respond to it by building a model out of beer bottles of somewhere they’ve never visited, or by building a gigantic bat house in some part of the country where bats have traditionally declined to visit.”

In few places is that more apparent that the flat, empty stretch of I-90 heading across the top part of the country from Wisconsin through Montana. Last summer, I traveled it to get to Indiana University’s field station near Cardwell Montana. As we sped west from Bloomington, the population seemed to slowly drop away, along with trees taller than five feet.  On the second day our caravan of SUVs drove through the rolling landscape of glacial alluvium, so isolated that the one radio station (Christian rock) is interrupted only by Dr. Elswick’s expositions on the finer points of the pre- 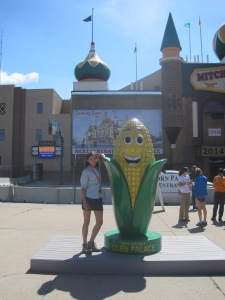 Luckily, the people of Mitchell, South Dakota created the Corn Palace to fix that. First built in 1892 in an effort to steal the “State Capitol” label from Pierre, it’s decorated yearly with real varicolored corn. In the manner of true roadside attractions has a whole complex of gift shops, where the estimated 500,000 tourists a year can buy candy corn, postcards, smiling corn hats, and/or guns.

This side of the Missouri river is still on the Pleistocene glacial sediment – a good foundation for corn, if the weather cooperates. The river itself skirts the boundary between glacial sediment and the less fertile shale and chalk of the Upper Cretaceous formations

About an hour later, from around the river bend, one catches sight of Al’s Oasis.

It’s a restaurant, grocery store, and purveyor of western-themed geegaws all rolled into one Old-West facade, and it serves a mean buffalo burger. Giant buffalo statue? Check. Small buffalo statue? Hordes of foreign tourists? Check and check. Reason for existing? To fill the mind-numbing void of I-90. So far, conventionally eccentric rest-stop.

Just down the road is a clear, arching outcrop of the Pierre Shale right below the power lines. “Clear” is a bit redundant with “Pierre Shale”, because outcrops of that unit tend to be clear: the organic-rich, crumbly material is too high in arsenic for plants to cover it. Nature’s weed-killer!

Keep your eyes peeled for a very large dinosaur skeleton being taken for a walk by a human skeleton near exit 170. It’s one of the weirder and more wonderful roadside oddities of 1-90, and of all the attractions mentioned in this post probably comes closest to Mr. Wednesday’s definition of truly inspired. Unfortunately I was driving on that stretch and couldn’t take a photo.

The next day, we were introduced to the geology of the Black Hills from the vista of Dinosaur Park in Rapid City South Dakota. Why dinosaurs here? There’s actually a reason for this one – their footprints were found nearby in the cretaceous-era sandstone of the ridge. The seven sculptures here are by the same artist who created the legendary Apatosaurus of Wall Drug, which the IU caravan only had the time to wave to in passing. Wall Drug really is a phenomenon whose completely random oddness could take up a whole post.

Geology has a way of taking us off the beaten path and to unconventional places. Once travelers get past the suburbs and stores of populated areas, America’s idiosyncrasies shine through. What are some of the roadside attractions you’ve come across in your field studies? Feel free to share in the comments!