This is the third and final installment of overthinking of my family’s trip to Quebec. Allons-y!

From La Malbaie in the annular trough of the impact crater, our road trip headed northwest along the coast to St. Simeon to catch the ferry.

A small population of beluga whales hangs out in the St. Lawrence. We were lucky enough to see several of them popping up above the waves on the ferry ride!

From the ferry landing at Riviere-du-Loup we headed north to Grand Metis to see one last garden – called either Reford Garden or Jardin de Metis depending on whether you’re an anglophone or a francophone. Elsie Reford set out to build the perfect garden there in 1926, but the rolling terrain on the southern shore of the St. Lawrence wasn’t very cooperative. The local soil is a thick layer of clay with very poor drainage left behind by the Champlain Sea, an extension of the Atlantic left in the depression of the retreating glaciers between 13,000 and 10,000 years ago. The waterlogged clay hosts scenic marshes of lupins and stunted pine trees but is a significant obstacle for the ambitious gardener. 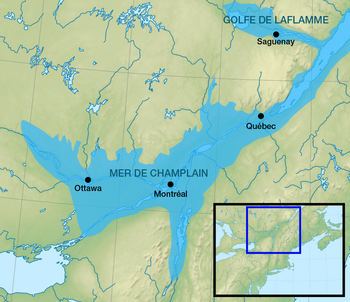 a recreation of the extent of the Champlain Sea ~11,000 years ago, courtesy of Orbitale at Wikipedia

As the Laurentian Ice Sheet retreated around 15,000 years ago its meltwater washed huge amounts of silt to the sea, which combined with marine clay deposits and the natural chemistry of the seawater created a massive layer of clay. As the crust heaved a sigh of relieve at the weight of the ice sheets being removed, that isostatic process gradually lifted the seafloor into dry land.  This garden took a lot of back-breaking work and planning to dig two- to four-foot deep beds, add in drainage systems honeycombed through the impermeable clay so the plants wouldn’t drown, and then fill in the beds with gravel and imported loamy soil. And this was in the early 1900s before Bobcat earth movers!

Mrs. Reford’s results are spectacular, though.

Eventually, though, the time came when we had to drag ourselves out of the garden and back onto the road heading south. But we had one last stop before Quebec City – my mother’s friend’s friend Yves was taking care of a Heritage Canada property at Pointe-de-Saint-Valliers and had invited us there for dinner.  Between dinner and dessert we hiked out to the point, where Yves casually mentioned that the cliff jutting out above the tidal flats was rather smaller than it had been because of that earthquake back in ’88.

Wait what, Quebec has earthquakes?!

It turns out that between the area being torn open as the Iapetus Ocean was formed after the breakup of Rodinia, a meteor punching a crater into the crust~342 million years ago, the nearby Appalachians being built as the ocean closed fully to form Pangaea 270 million years ago, the Atlantic Ocean ripping open ~175 million years ago, and the vast weight placed and released by the ice cap in the Pliocene/Pleistocene glaciation, the crust under the St. Lawrence has had a tremendously stressful life.

All this stress is exhibited as the St. Lawrence Rift System that stretches from the Ottawa-Bonnechere Graben to the mouth of the St. Lawrence. The dramatic escarpment along the northern side of the St. Lawrence Valley was formed by grabens and half-grabens dropping down due to the extensional force created around 450 million years ago, when a carbonate platform collapsed during the formation of the Iapetus ocean. After 450 million years of erosion the resistant granites, quartzite, and marble of the Canadian Shield now make up the footwall of the graben (visible as the 200 meter high escarpment), with younger rocks making up the hanging wall.  Those late Proterozoic to early Paleozoic faults were reactivated with each successive compression or decompression of the crust.

Right now, the crust is still in the process of rebounding and decompressing after the last ice age. That localized expansion of the crust creates friction along those old fault lines – when too much force builds up for friction to resist, the rocks on either side of the faults slip past each other with a violent jolt that creates an earthquake.

In the region we were traveling, these quakes are categorized within the Charlevoix Seismic Zone and the Western Quebec Seismic Zone. Pointe-de-Saint-Valliers sits on the south-western fringe of the Charlevoix Seismic zone, where the weaknesses in the crust created by the meteor impact in addition to the late Proterozoic faults release the rebounding stress after the last ice age.

Imaged edited from the EarthquakesCanada site.

Luckily the fault zones were on their best behavior while we were there.

After that leg of the road trip we spent a wonderful day-and-a-half exploring Quebec City. My mom introduced me to all her favorite haunts from her childhood there. Much ice cream was consumed, because where else can you get maple ice cream with maple sugar crunch and maple cookies?!

On the way back to Montreal to fly out we found the last remaining dinosaurs in Quebec! No dinosaur fossils have been found is this region, as any rocks that might have contained them were scoured away by the ice caps. The youngest fossils in this area date from the Ordovician. But we can still dream, right?

The author joined the intrepid herd of dinosaurs at the famous Madrid 2.0 gas station in St-Leonard-d’Aston, Quebec (exit 202 on the Trans-Canadian Highway)

Bonus: When my sister and I start hanging out, silly things happen. Like a cartoon geologic history of Laurentia.

One thought on “Oh, Canada! Part 3: Clay and Quakes”