NASA’s Gravity Recovery and Climate Experiment (GRACE) satellites had their 15th birthday this week! The mission was only meant to last 5 years, but dynamic duo of earth-monitoring satellites has kept on observing gravitational anomalies from orbit since they were launched on March 16, 2002. NASA put out this graphic to celebrate:

So why do we care about gravity enough to collaborate with German’s space agency (GPZ) to spend 127 million dollars to launch a payload into space to measure it more precisely?

The two GRACE satellites (GRACE-1 and GRACE-2) are roughly the size of two large couches, and are in constant contact via a laser beam which continuously measures the distance between them. If one of the two flies over an area with a large gravitational anomaly it slows down, which either increases or decreases the distance between the two depending on whether the lead or following satellite is slowing down. This distance data is then compared with GPS information of the two satellites that is collected at the same time to create a “geoid” – a vertically exaggerated model of the imaginary topographical surface of the earth where areas with higher gravitational pulls have a high elevation, and the opposite for areas with lower gravitational pulls.

Simulation of the geoid, courtesy of NASA Earth Observatory

The image above come from https://earthobservatory.nasa.gov/Features/GRACE/page3.php, which also does a much  better job of describing GRACE and the geoid than I can. When this data is combined with data from other satellites and ground-based systems, it has the illustrious scientific name of the “Potsdam Gravity Potato“, based on the city in Germany where a research team specializes in this melting pot of remote-sensing data.

The 2011 Gravity Potato – but does it taste good with butter and parmesan cheese?

The magic of the GRACE data comes in its 15 years of data. In that time period certain features on the geoid are almost stationary (The Himalayan mountain range, the depression around Hudson Bay where the Laurentide ice sheet depressed the earth’s surface). However, water is heavy and constantly moving, and these satellites give us a quantitative idea of exactly how much mass is shifting (i.e. being melted or withdrawn) without having to deploy squads of intrepid graduate students to take GPS elevation readings all across Greenland.

The University of Colorado –  Boulder created an online platform to explore the GRACE data – click HERE. 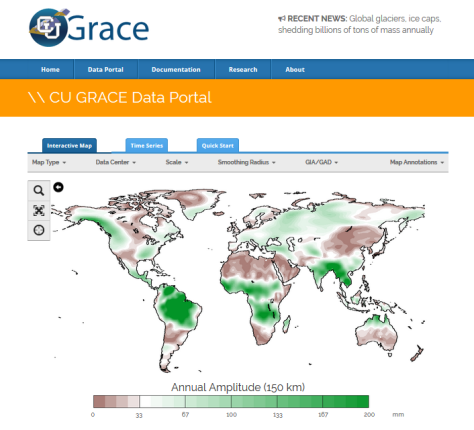 GRACE’s ability to monitor change also gives us an unprecedented look at the invisible water we rely on – groundwater! While we still don’t have a way to take an MRI of the earth a determine the volume of water in an aquifer, GRACE can at least note when an area becomes relatively heavier (aquifer is recharged by rain or snowmelt) or lighter (aquifer is pumped, and the water flows away through rivers to the ocean). Calculating the rate of this change allows us to discover which aquifer systems are declining at rates that could endanger future use.

The world map above shows 37 of the most critical aquifer systems humans depend on, and whether their amounts of water in storage have increased or decreased between 2003 and 2015. (For more information click HERE) Decreases are shown in varying shades of red and orange (as in California’s central valley, or northern India), and increases are shown in shades of blue (High Plains aquifer, Murray-Darling Basin). Before GRACE, the only way to approximate this information would be to check hundreds of wells around an aquifer every single month! Compared to the resources needed to drill thousands of wells and employ scores of technicians, $127 million to launch some satellites seems like a steal.

The above map shows a more general view of terrestrial mass change from GRACE data between 2003 and 2009, and was quoted in this article by Dr. Mohammad Shamsudduha, (Institute for Risk and Disaster Reduction, University College London, UK) about groundwater drawdown in northern India, for example.

The dilemma of being a scientist is that the “OMG isn’t it fantastic that we can get all this data to learn about the earth!!” feeling is countered by the “Well darn this data gives us terrible news” feeling. The upside is that the GRACE mission, for the first time, gives us accurate month-by-month information on the state of our ice caps and aquifers. If nothing else this gives scientists a powerful tool to understand natural seasonal variations and tease out man-made changes. If we can’t measure a phenomenon, we can’t accurately improve our reaction to it. I hope that through this data scientists can show policy-makers how we’ve caught ourselves red-handed draining the earth’s accessible water stockpiles, and incite action to preserve what is left.

I was geeking out about these satellites to my sister, who immediately had the same mental image – I just had open up MS Paint to draw GRACE-1 and Grace-2 wearing fluffy, sparkling quinceneara dresses in honor of their 15th birthday. See below for the delightfully ridiculous result.

P.S. For more of the nuts-and-bolts mathematical and engineering behind how these satellites work, you can check out this informative circa-2003 internet flashback.

P.P.S. for even more information, check out these links!