To minimize my off-topic rambling, I’m covering my trip to Petit Jean State Park in two posts: Petit Jean State Park: the outdoorsy view about the hiking, and this one to cover the geology we saw along the way! This second post one may make more sense if you read the first one before it.

Let’s zoom back out for a moment.  We need some perspective to see what these turtles are made of, where they are, and why they’ve been able to hang around.

Geologically, Petit Jean State Park lies in the Arkansas Valley region of the state, sandwiched in between the faulted, tortuously folded rocks of the Ouachita Mountains to the south and the flat pile of sedimentary rocks that form the Ozark Plateau.

Geologic regions of Arkansas – the park location is mark with a star. Yellow colors indicate unconsolidated sediment, greys and blues are conglomerates and igneous rocks, light green is sandstone, darker green is shale, and blue is limestone.

Because of this pressure from the south, the layers of sedimentary rock around the park are gently folded into shallow syncline ( U-shaped) and anticline (n-shaped) structures. The axis of these folds is perpendicular to the source of pressure, so the folds create east-west trending lines on the surface. Closer to the Ouachita Mountains the pressure exceeded the rocks’ ability to deform into folds; they broke along faults, like the Ross Creek faults on the right-hand side of the image below.

The Pontoon Syncline creates the bowl-shaped plateau that the park rests in. From above, the plateau looks like the head of a bird overlooking the Arkansas River.

I couldn’t resist messing with the USGS topos…

This topography closely mirrors the underlying geology of the park, showing where the Arkansas River and Rose Creek have broken through the tough sandstone “cap” of the plateau. (Arkansas Geological Survey map of this view can be found here)

The geologic map for the Adona Quandrangle below covers the southern part of the park, and highlights the trails that Jackie and I explored. In the zoomed-in box, you can easily see how Cedar Creek is carving back into the resistant Hartshorne sandstone that caps the plateau to expose the weaker Upper Atokan shale below. Click on this sentence to go to the Adona quadrangle map PDF courtesy of the Arkansas Geological Survey.

Nowhere in the park is the stratigraphy more defined than at Cedar Falls! There’s a clear boundary visible between the pale sandstone at the top of the falls and the darker shale at the bottom.

During the early Pennsylvanian period when these sediments that would become these sandstone and shale rocks were deposited, central Arkansas was submerged under a shallow continental sea. The Atokan shale and Hartshorne sandstone are separated by an eroded gap in the record that erased years of sediments – an unconformity. Their composition tells a story of a changing depositional environment: it was in a coastal swamp or underwater and filled in with fine-grained muds from around 315 to 311 million years ago (mya), ended up above water either by uplift or a dropping sea level around 311 mya, and the re-covered by a blanket of sand deposited by meandering river systems and deltas from approximately 311 mya to 307 mya.

The sandstones and shales in this park are about 10 million years younger than the similar rocks I’ve profiled in Giant City State Park (Illinois Basin), and about the same age as those  I climbed on in the Red River Gorge area (Cumberland Plateau).  They all belong to the Carboniferous period from 299 to 359.2 million years ago.

The Carboniferous period is defined by huge jungles of ferns and early trees that flourished in the high oxygen levels, and then were buried to for the coal that now powers our industrialized lives (Carboniferous = Latin for “coal bearing!). You can’t find coal in Petit Jean State Park, but a few fossil traces of this era remain! The best-known fossil location in the park, along the Cedar Creek trail, was covered by an intermittent stream when we were there but signs along the Cedar Fall Overlook boardwalk also give visitors an introduction to the first drafts of trees that once grew here.

Beside the fantastic views from the top of the plateau, there are two smaller-scale geologic features that make this park awesome to explore: the “carpet rocks” and those “turtle rocks”!

Like sandstone rocks in the other two parks, the Hartshorne sandstone contains the dark, wavy, resistant iron formations called Liesegang banding. Unlike the other parks, though, Petit Jean sits on the northernmost fringe of rocks deformed by the rising Ouachita Mountains between 290 and 245 million years ago.  This pressure created geometric series of cracks in the sandstone, and when water enriched by tiny iron-rich hematite, goethite, and magnetite particles entered these cracks it left behind a cement stronger than the surrounding rock. As the weaker rocks are the iron-rich cement was worn away, it left behind the crazy raised pattern of the carpet rocks. Unfortunately the best examples were underwater when I visited the park, but here’s a photo from the Arkansas Geology website: 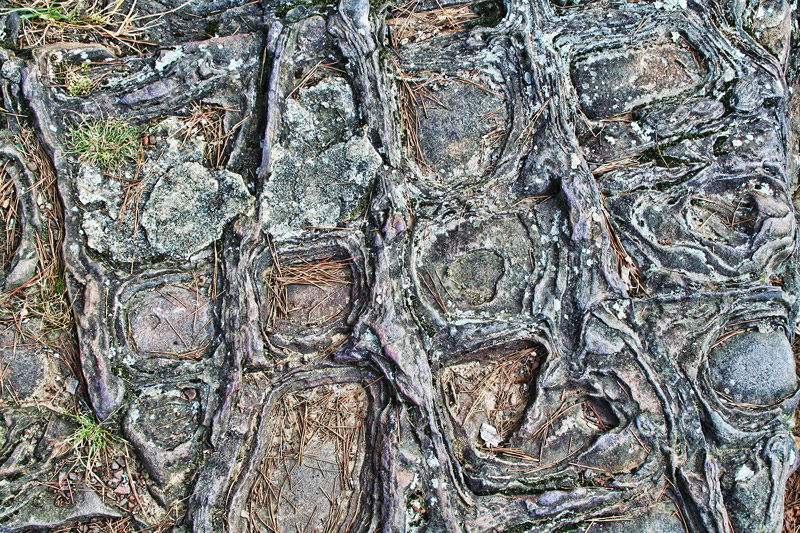 You can also see subtler version of them in the cliffs in the first 1.5 “map miles” on the Seven Hollows trail (eastern part of the trail).

The most striking geological feature of this park isn’t found anywhere else – the turtle rocks! No real (or Ninja) turtles were harmed in their formation. The Arkansas Geological Survey blog describes them as:

The processes that generate “turtle rocks” are not clearly understood. One explanation suggests that these features were created by a process known as spheroidal weathering, a form of chemical weathering that occurs when water percolates through the rock and between individual sand grains. These grains loosen and separate from the rock, especially along corners and edges where the most surface area is exposed, which widens the rock’s natural fractures creating a rounded, turtle-like shape.

Additionally, iron is leached from the rock and precipitated at the surface creating a weathering rind known as case hardening. These two processes along with the polygonal joint pattern contribute to this weathering phenomenon.”

These turtles rocks exist at the very top of the plateau, and at the top of the ridges.  This is different than at similar sandstone “caps” on the landscape in temperate regions, like in the Red River Gorge, where the top of the formation is relatively smooth and even. Water is relentless in finding the most efficient path downhill and these turtle rocks, with their crazy honeycomb drainage pattern, defy shortcuts. My idea is that the turtle rocks only exist at the top of the because of the nature of stream drainage patterns, stream flow, and the speed of that flow.

It’s pretty intuitive that intermittently wet ditches feed into into small creeks, which flow into medium-sized streams, which combine to form rivers. On the quantitative side of hydrology this is represent by the “stream order” systems classified as 1, 2, 3…. where order 1 streams have no regular tributaries, order 2 streams have 1 tributary, etc. By definition, in a given watershed order 1 streams are at a higher elevation that order 2 streams (there’s no cheating gravity!), and the stream order increases with decreasing elevation.  By the the time water organizes itself into something that a hydrologist would give an order number it has carved out a regular depression in the terrain that it reliably flows through.

Reliable flow, though, would be lethal for a turtle rock. They only exist because the force of water can’t yet overwhelm the intrinsic weirdness of their structure. A little water emphasizes the shape of the rocks by removing small amounts of sand slowly enough that it doesn’t erase the maze of fractures and cracks that define the turtles’ shells. Because of this, they can only remain at elevations above the highest order 1 stream, where rainwater hasn’t organized itself into defined channels yet.

However they were formed, they give the landscape a surreal Dr. Seuss-ish touch that’s really delightful. And just down the trail from the turtles, there’s a patch of tafoni “honeycomb” weathering interspersed with Liesegang bands that reminds me of a village in “All the Places You’ll Go!”. I know it’s made by pockets of easily dissolved minerals like salt or chalked weathering out of harder sandstone and ancient iron deposits, but my inner eight-year-old sees a miniature cliff dwelling…

Petit Jean State Park crams so many whimsical rock formations, fossils, and cliff-top views into a relatively small piece of land. It makes for a wonderful field trip!

For more information on the park’s unique geology, check out:

The entry for Petit Jean Mountain on the Encyclopedia of Arkansas