I could try to be coy and let you think that this snowy post happened, say, last weekend and I’m being a timely blogger who never has a backlog, but I’ll be honest. This has been kicking around since my housemate and I went adventuring over Thanksgiving break. Better late than never!

If the campground host tells you that the Tumalo Creek Campground near Bend is only going to get down to a low of 40 degrees in late November, be smarter than me and don’t believe them. On the plus-side, my friend Liz and I were so cold that we packed up camp at 7AM and were the first ones on the trail in a winter wonderland. We had the North Fork trail along Tumalo Creek all to ourselves! 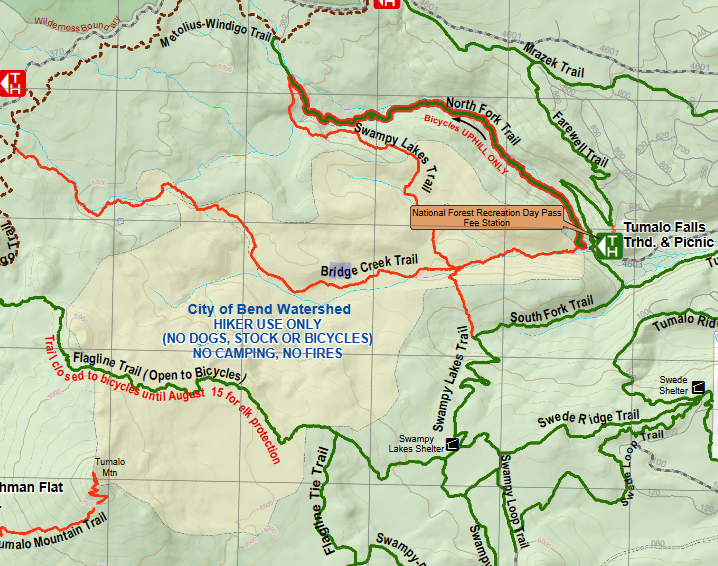 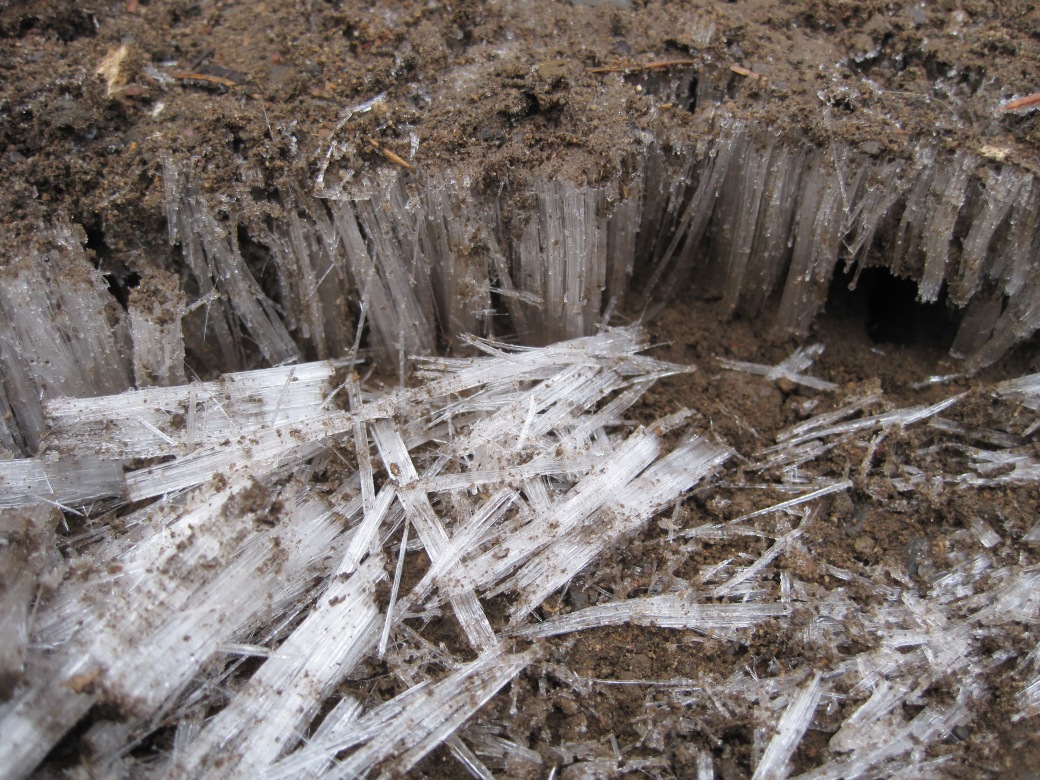 As we hiked up to above Tumalo Falls I felt the ground crunch satisfyingly under my feet. I looked down, and saw that I was walking on these strange, fragile columns of ice! Each tuft was about 1 to 2 inches tall and supported a very thin layer of soil. I had to file it away in my head as “nature is weird”, but once I got home I found out that it’s called needle ice. This forms when the soil temperature is above freezing but the air’s is below freezing. As capillary action pulls water up through the soil it freezes in long vertical strands. 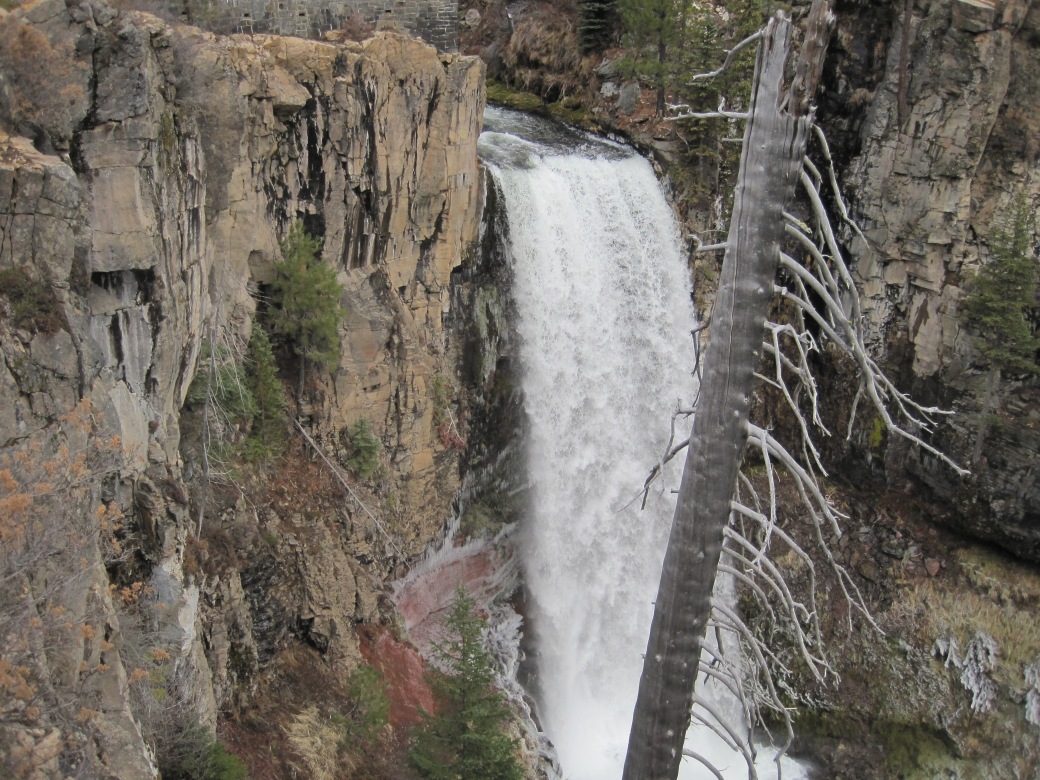 Tumalo Falls! But why is it here? The sign in the parking lot has a handy explanation – this sheer cliff was created as the headwall of a glacier during the Ice Age.

Liz was just a little happy to see the first snow on the trail as we climbed… and it got better!

The trail didn’t have enough snow for snowshoes, but was precarious going in boots. We were glad for our trekking poles.

After Tumalo Falls, there are several beautiful smaller waterfalls further up North Fork Trail on Tumalo Creek. This one had a prow of rock jutting out in front of it that made a perfectly scenic picnic spot.

We found a snowman hiding in a hollow log – a little gift from a hiker the previous day! 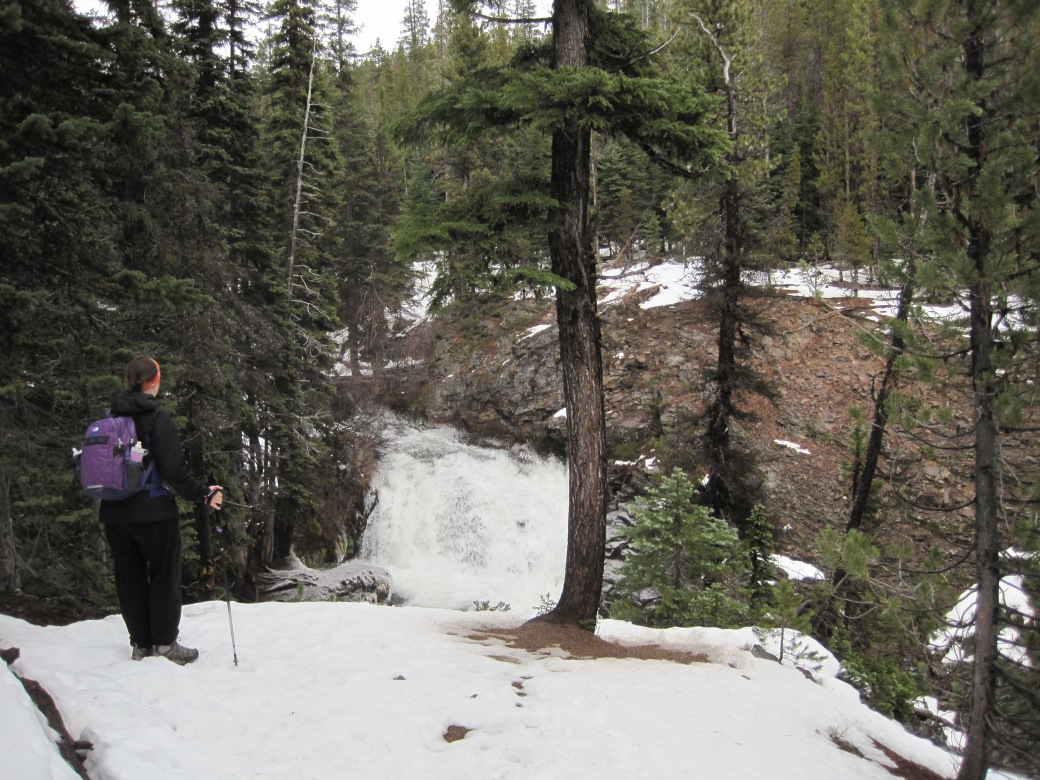 That day we did the North Fork Trail as an out-and-back route, which took us from 8:30 AM to 1pm. We had hoped to make a loop with the Swampy Lakes and Bridge Creek trails, but the icy trail made for more difficult going than we had planned, and we decided to bail on the 8 mile loop in favor of a 6-mile hike. Heading back to the trailhead around 11AM we started to pass other hikers and a seemingly endless parade of their adorable dogs.

After our chilly hike, I wanted to drive down to Mt. Bachelor to see what a ski resort looked like in the winter. There might be a theme here  – being from a hometown that’s lucky to get an inch of snow, I’m fascinated by my first glimpses of snow sports! Liz kindly humored me, and we drank our pricey hot cocoa on the patio watching the snowboarders and skiers play in the disappointingly thin layer of powder. Mt. Bachelor is a ridiculously perfect dormant volcanic cone – you’ll definitely be seeing more posts about this area when I have time to read up on volcanology. Again, not a subject we have to think about much in Tennessee.

To end the day, we drove into downtown Bend to window shop in the cute town center and have dinner at Deschutes Brewery. We were just in time to watch the Oregon State University versus University of Oregon ‘Civil War’ game….ouch. The Ducks beat our Beavers 69-10. At least the delicious food and beer cushioned the blows somewhat. (The next day, I passed a church’s sign that said “Don’t worry Beavs, there’s still basketball.” Small comfort.)

I couldn’t help but notice that as we crossed the bridge to the Tumalo Creek Trailhead, a large pipe crossed the stream with us. Once in the parking lot, stern “KEEP OUT” notices shepherded us away from a gate to some new-looking buildings by the stream. To make matters more curious to this hydrologist, the trail map warned

Hiker use only (No Dogs, Stock, or Bicycles)

No Camping, No Fires”.

After some Google sleuthing, it turns out that this mysterious complex is the Heidi Lansdowne Water Intake Facility and that pipe is part of a 10-mile aqueduct that runs under Skyliner Road to the Outback Water Treatment Facility just west of Bend.

If we had been able to do our whole loop, we would have been hiking through the water supply area for the City of Bend! The rain that falls in this area flows down to Bridge Creek, where a portion of that water is diverted through the Intake Facility into the pipeline before the stream joins Tumalo Creek. The Heidi Lansdowne Intake Facility was built in 2016 to get the city into compliance with EPA regulations requiring filtration of surface waters.

Picture of the new intake facility from Bend Water Utility

Bend has been meeting its needs with water from Bridge Creek since 1926 when it signed an agreement with the US Forest Service (USFS) allow Bend to manage the Bridge Creek Watershed. In 1926 Bend built a basic intake and filtration facility connected to a pipeline leading to town, and added an additional parallel pipeline in the 1950s. Until 2016,  Bend still relied on these two aging pipelines. In 2014 the city broke ground on the new intake facility with advanced screening to protect fish and provide a better filter to protect against elevated sediment loads caused by wildfires as well as a more modern pipeline running directly underneath Skyliner Road.

A photo of the pipeline in progress in 2014, from the same 2014 presentation by Heidi Lansdowne

All this rambling to say that there are good reasons that this watershed is protected against:

Seeing as this is the source for much of what flows out of the taps of almost 80,000 people, it’s understandable that the public utility wants to avoid these risks.

To give you a sense of this system’s scale compared to the town, I created a map using GeoJSON.io and Mapbox.com to show Bend, the municipal watershed, the intake and treatment facilities, and the new aqueduct (the dark blue line between the facilities). GEOG 370: Cartography this term paid off! 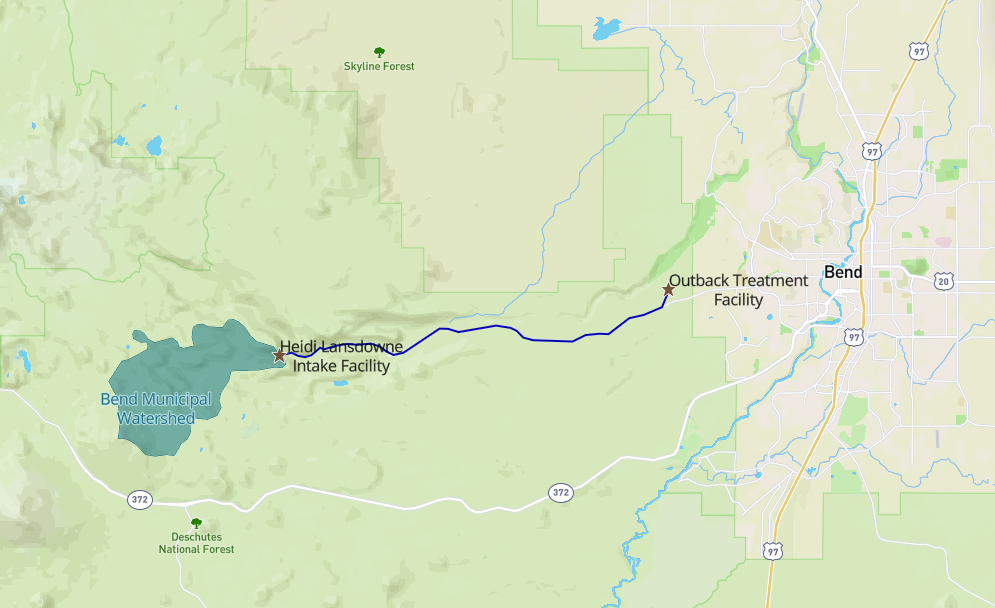