My sister is so patient with me and my geologic pilgrimages. She spent two days in 2014 tolerating me taking selfies with every geologic contact I saw in the Grand Canyon. Last summer, the two of us hopped in the car and drove south through the wildfire smoke to another one of my bucket-list stops: Crater Lake. 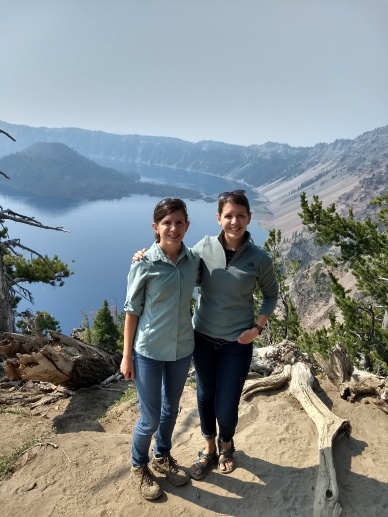 I knew it was the deepest lake in the USA, but nothing really prepared me for the size of the view when we arrived at the rim of the caldera! The ferry to Wizard Island looked absurdly tiny as it cruised past, 800 ft below our feet. The lake itself covers 20 square miles – it’s large enough to swallow the entire town I’m living in. 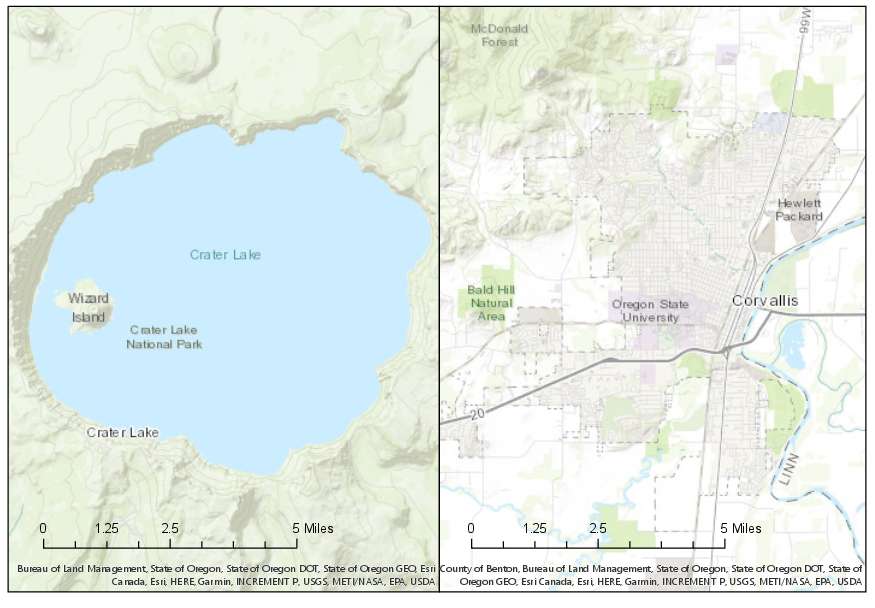 Heather sat on a bench and befriended the ground squirrels while I spent some quality time in the geology museum carved into the side of the caldera to get my bearings.

Crater Lake was a very different landmark 7,700 years ago: it was a 12,000 foot volcano that we retroactively refer to as Mt. Mazama. Around 7,700 years ago it catastrophically blew its top, spewing 12 cubic miles of magma into the atmosphere. That’s enough ash to cover the entire state of Oregon in a layer 8 inches deep if it had settled perfectly.

Once the explosive eruption had come to a close, the rim of Crater Lake stood only 8,200 feet at its highest.

The upside of that massive evisceration of the volcano, besides scenic views, is that it gives us an opportunity to see the old plumbing of Mt. Mazama up close and personal! 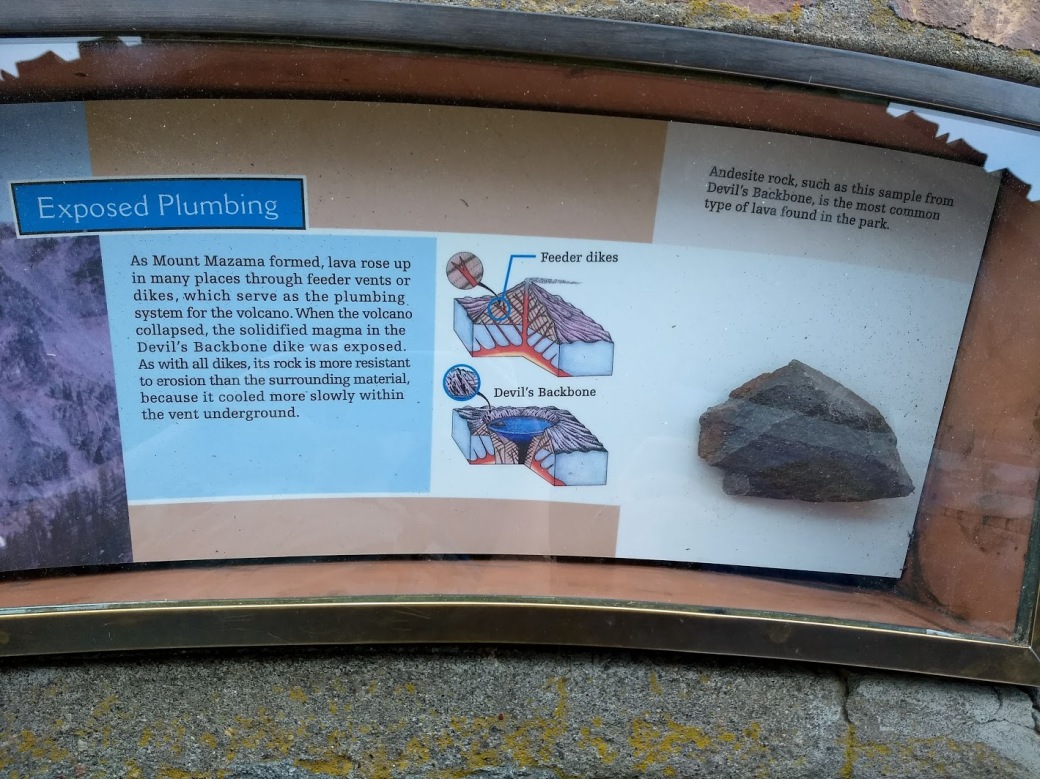 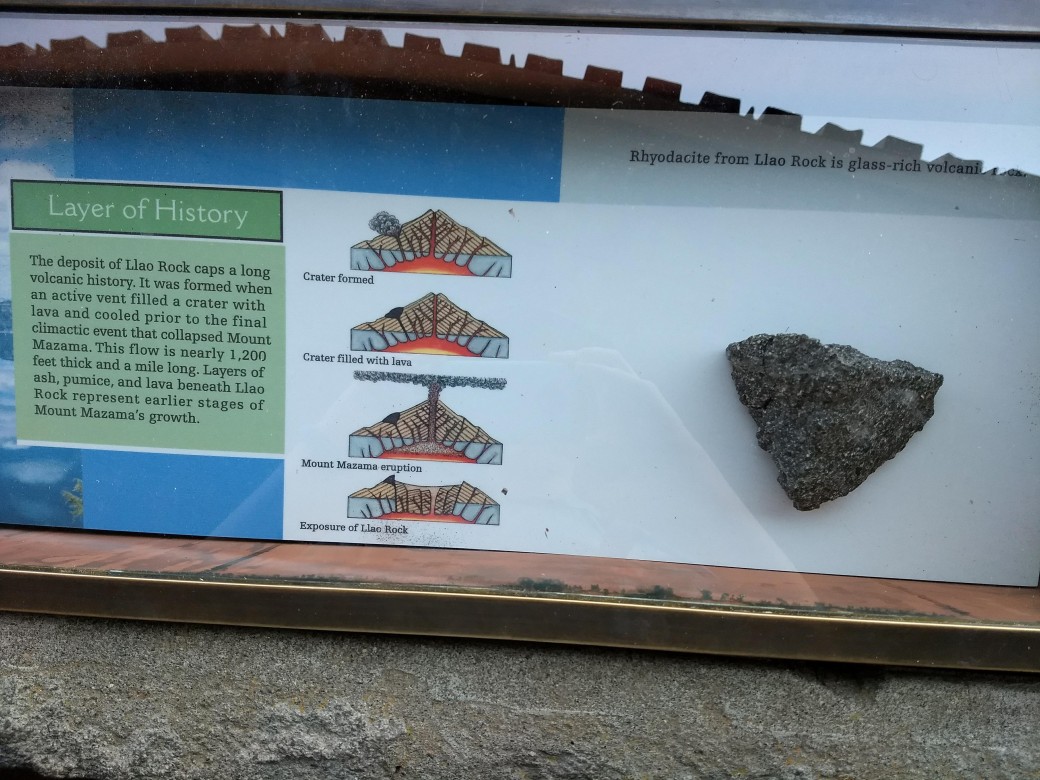 When we hiked up to Garfield peak, we traversed jumbled cross-sections of Mt. Mazama’s ancient eruptions. 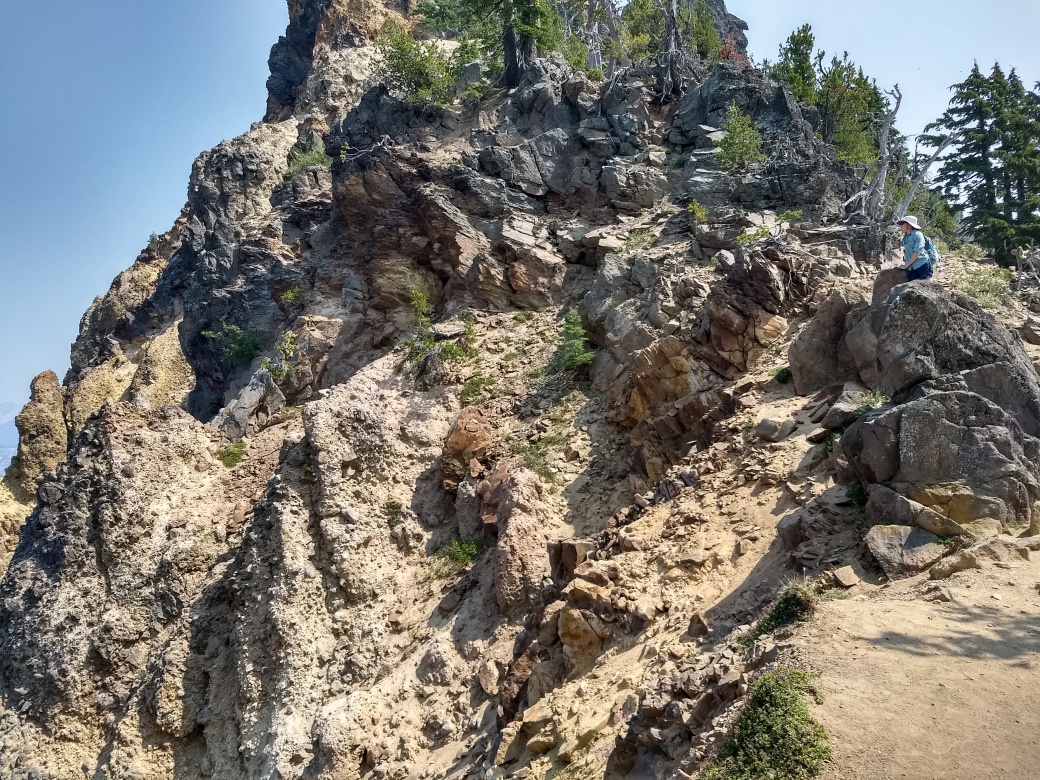 In some places there are very obvious sloping structures where lava flowed down Mt. Mazama’s flanks (below), while other parts of the slopes are messes of lighter-colored welded ash and pumice (above). 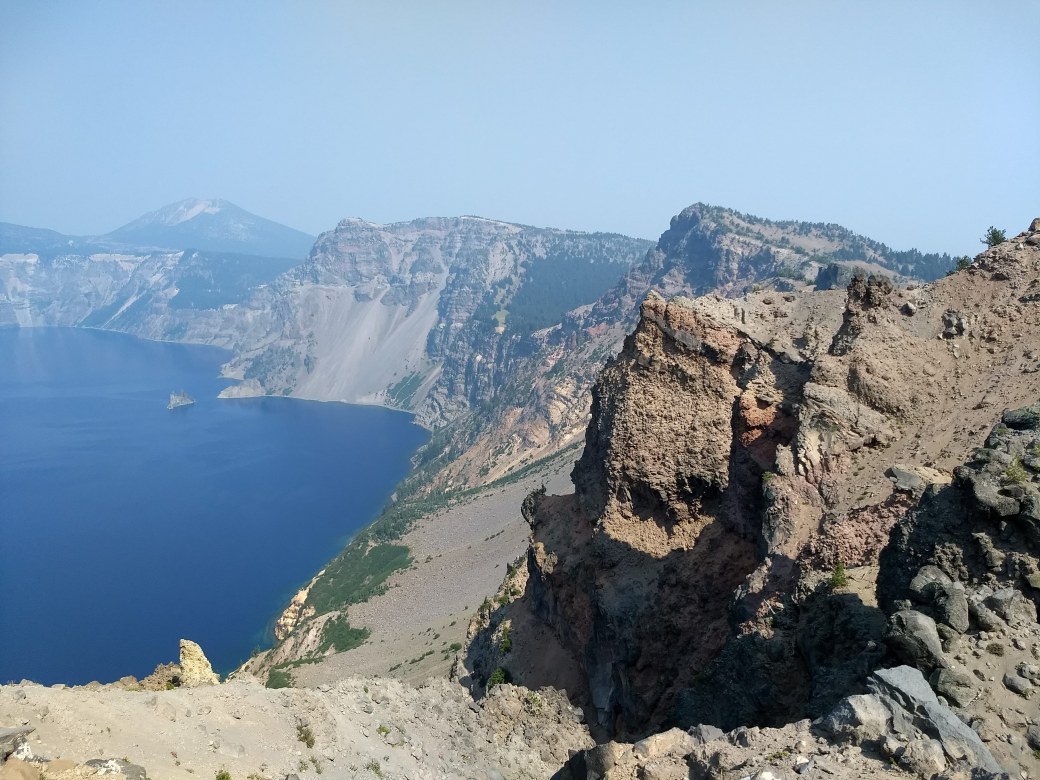 We had fun taking perspective shots with the Phantom Ship landmark, which is the scant remnant of a fissure that was filled with lava and cooled into a more resistant fin. 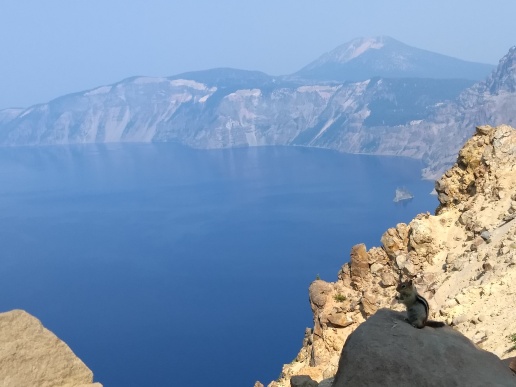 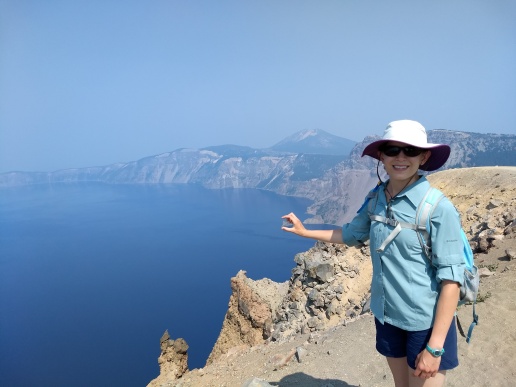 Crater Lake is one of the best-appreciated geologic sites in the nation; it’s a centerpiece of scores of books and papers. Nothing I could write in this blog would come close to doing justice to all that, so I’ll keep it short! Here are some of the more noteworthy online resources I found to learn more about the park’s geology:

Ian Madin wrote a great blog post on cycling around Crater Lake at Cycle Oregon, and it includes GIS reconstructions of Mt. Mazama as well as detailed descriptions of the eruption.

The USGS created a beautiful and informative poster using the LIDAR data (super-detailed laser-measured elevation) for the park, with extensive landscape notes. Click on the link in the previous sentence to get the full-sized poster. 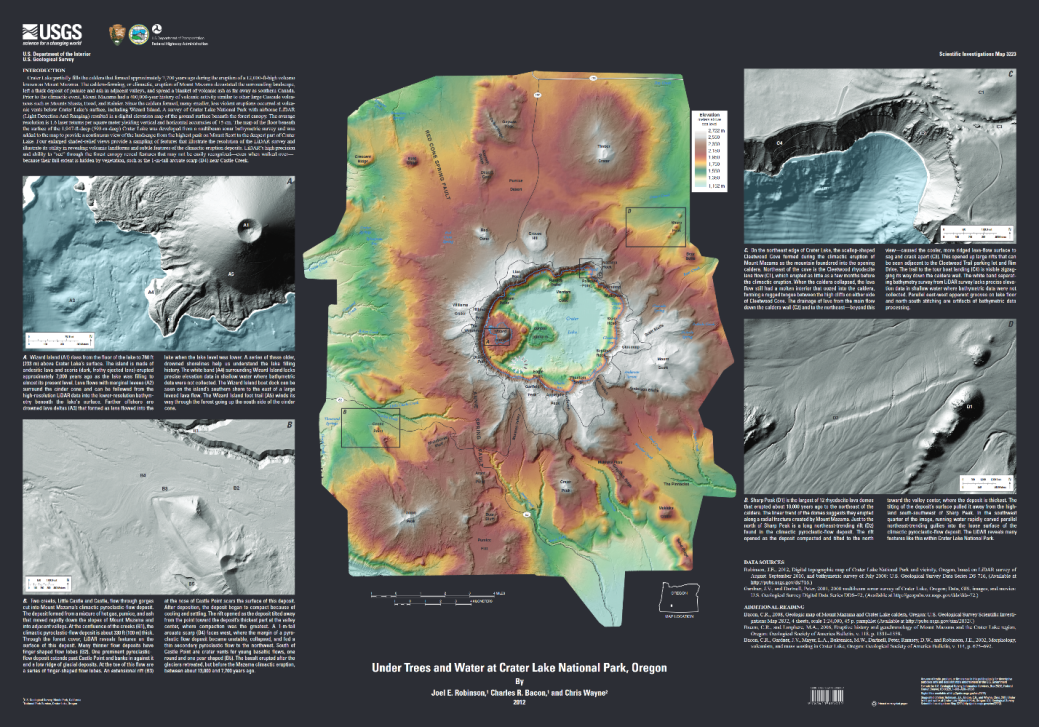 As soon as we finished the hike up Garfield Peak the wind’s direction changed. During the day the wind blew fresh air from the west, but in the evening the wind shifted to usher in the wildfire smoke from the huge fires in northern California and southern Oregon. Wide vistas were replaced with a blanket of smoke so think that I couldn’t see my car from across the parking lot. Everything besides the road might as well not have existed as we drove cautiously northwest out of the park to head back to Corvallis. 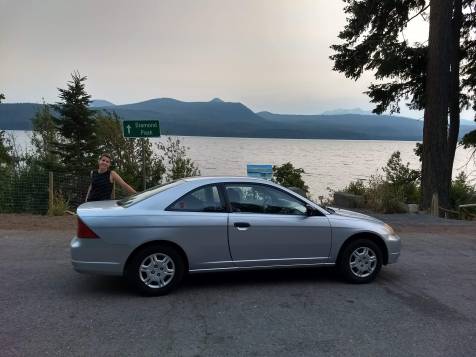 Heather, Jo the Adventure Civic, and what would be Diamond Peak if it wasn’t shrouded in smoke.

The smoke mostly cleared by the time we reached Diamond Lake. Heather and I really wished we could blow off her flight back to the east coast to spend a few days camping here! It’s always hard dropping her off at the airport. Separating was made a bit easier when a few weeks later we got news that the whole family would be going to a reunion in Europe the next summer.  The two of us started plotting new adventures in France and Ireland!