Part 2 of the geology of my summer vacation. For an idea of where this fit in our trip, check out the travelogue post. This post follows the first post on Mont Saint-Michel.

I had left all of the vacation planning in Heather’s able hands so I could focus on my thesis last spring. My only requirement (only halfway in jest) was that the vacation had to include eating pastries on rocks. And boy, did Heather deliver! Days 5 and 6 of the trip found us near Trebeurden and Ploumanac’h on the fabulous pink granite coast. The sun was shining, the pain au chocolat was as delicious as I had ever hoped for, and a giant granite playground awaited us.

There isn’t a shortage of granite on the Brittany coast – we met some in the last blog post too. Much of was grey and only visible in isolated outcrops. As we hiked east from the little port of Ploumanac’h along the coast, the grey granite gave way to crazy piles of unmistakably pink rock! I couldn’t help but start wondering what caused the change in color, not to mention the weird shapes!

It turns out that the explanations come in threes: the pink granite is made of three minerals, it belongs to one of three different igneous events in the region, and three different substances have sculpted the granite into the wild shapes at Ploumanac’h.

The pink granite gets its rosy hue from potassium feldspar, while the greyer granite has more creamy-colored plagioclase feldspar in its makeup. I illustrated their mineral composition in the figure below. The natural history museum in Ploumanac’h informed me that the pink granite is  approximately 50% potassium feldspar, 30% quartz, and 20% biotite. They didn’t give details about the less glamorous grey granite and I was too focused on getting to the pink stuff to even take a close-up of it, so I’ve only approximated its composition.

Both colors of granite at Ploumanac’h were put in place around 300 million years ago (mya) during the last gasps of a mountain-building event as the ancient continents of Gondwana and Laurussia crashed together to form Pangaea. I talked in depth about this massive game of continental bumper-cars in the previous post, so I’ll skip it here. Over time erosion unearthed the buried masses of granite, as shown in the figure below.

Photo of a diagram in the exhibit at the Maison du littoral, text translated by me.

To get even more specific, the granite in the area was put in place in three physically distinct phases around 300 mya. In the first phase, two magmas with different compositions intruded the surrounding metamorphic rock at the same time. The first was rich in silicon and formed the coarse-grained pink granite and the second was poor in silicon and formed the dark gabbro visible near Tregastel. These two igneous rock types melted in the same event from two different types of source rocks, giving them their unique compositions.

During the second phase, another silica-rich magma forced its way into joints in the now-cool first pink granite. This magma had a similar composition  to the pink granite in the first event but cooled more quickly than its predecessor, forming smaller mineral crystals.

In the third phase, a magma with a more basic (as in pH) composition intruded into an dome-shaped weakness in the cooled granite from the first two phases. This magma cooled into the blue-gray granite near Ile-Grande.

translated by me, original images found at : http://ville.perros-guirec.com/fileadmin/user_upload/mediatheque/Ville/Maison_du_littoral/refonte_page_environnement/expo_origine_du_granit_roseBD.pdf 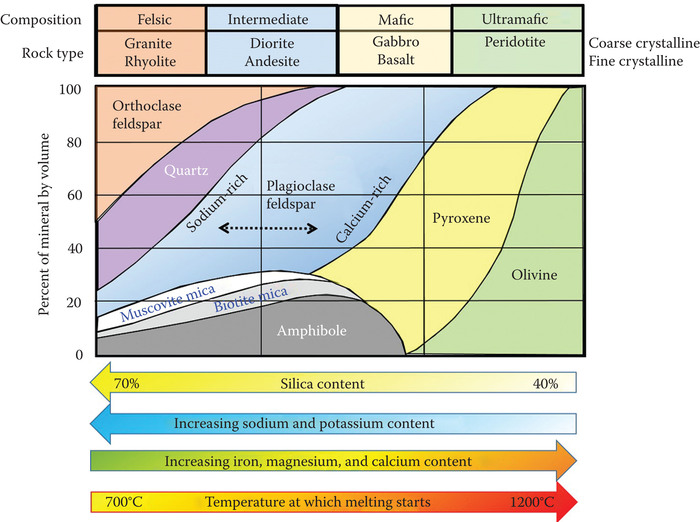 This indicates that the pink granite was formed predominantly by the melting of low-density, high-silica rocks at low melting temperatures. The grey granite at Trebeurden is a little bit to the right of the pink granite on the classification chart – still a granite, but including more minerals with higher melting points and less potassium feldspar (a.k.a.  orthoclase feldspar). The gabbro at St. Anne is even further to the right, and likely formed from the melting of a chunk of oceanic crust. Sometimes rocks are completely off this chart. For example the magma that formed the pale granite that we saw at Mont Saint-Michel either melted at low temperatures (geologically speaking) of ~600 C or melted from source rock whose chemistry didn’t allow for the formation of dark mica or amphibole crystals.

So I figured out why the granite was pink instead of grey. But what created its otherworldly shapes? And where did all these boulders come from?

Usually boulders are created in steep landscapes where chunks of rock falling off the canyon walls are tumbled aggressively in mountain streams and carried long distances. In contrast, these boulders have barely moved relative to each other since the granite cooled! They were formed in place by erosion, shown in the diagram below. The technical French term for this formation is “un chaos”, which seems very appropriate.

The important factor here is a change in the rate of weathering and erosion. In this case, the erosion regime changed from slow dissolution of the rock by groundwater (shaping the granite into boulders underground) to more rapid erosion as the waves crash on the shore (exposing the boulders).

Once the boulders are exposed to the elements, two slower types of chemical erosion nibble them into even more convoluted shapes. Chemical reactions between salt spray and the the mica and feldspar crystals in the rock transform them into weaker clay minerals that wash away, creating divots and creases in the rock wherever salt collects.

As saltwater works on the rocks from the top, organic acids in soil eat away at the rocks at ground level over tens of thousands of years to create subtle mushroom shapes.

The end result is an utter delight to explore!

Heather points out a quartz vein in the pink granite. The boulder on the center left shows a distinct salt weathering divot on its top.

Climbing to the top of a formation, I found a 2-foot deep crenelated “crow’s nest” formed by salt weathering!

Sources (all are in French):

Less technical summary from the local tourist board: http://www.cotedegranitrose.net/la-cote-de-granit-rose/geologie-le-granit-rose/