This post is the last in a series that covers last summer’s van Stolk family trip to Ireland. Here’s the highlight map to get you oriented: 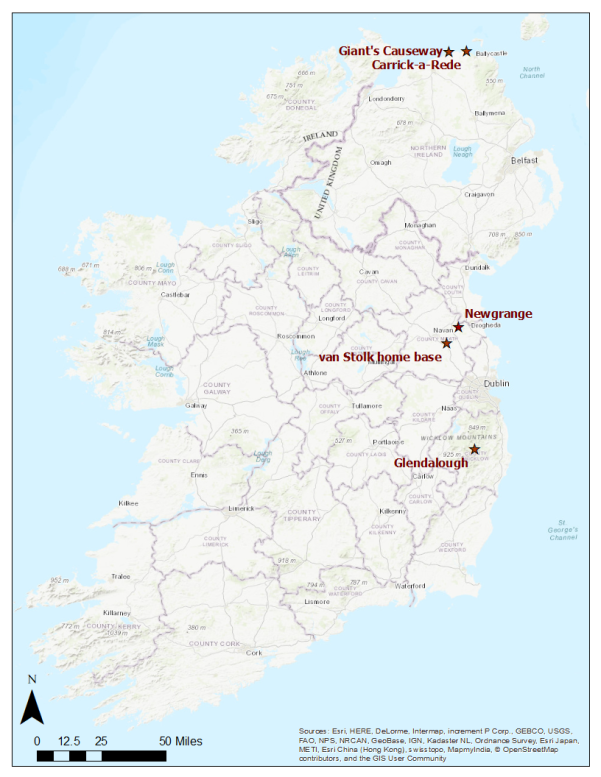 We don’t know much about the people who built the massive passage tomb at Newgrange over 5,000 years ago. They left no written record, and we can only guess at how they used the ritual passages aligned precisely to the winter solstice. However one thing is obvious – they had a particular eye for beauty and detail.

How do we know this? The story is all in the rocks. Black and white, rough and smooth, plain and intricately carved. The massive “kerb stones” along the bottom of the monument were not shaped by human tools except for detailed swirling patterns created with small chisels. The builders must have scavenged all over the countryside for boulders of the appropriate size to decorate. And many of the rocks come from dozens of miles away! 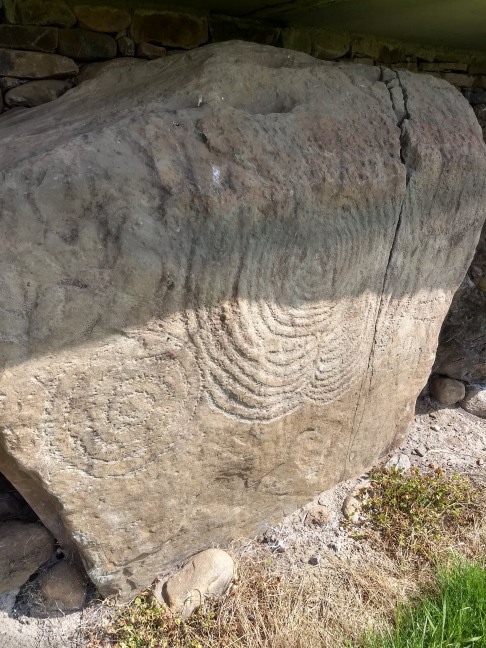 Swirling patterns on a kerb stone

Bright white quartz cobbles from the Wicklow Mountains (near Glendalough, which I wrote about in the last post), dark speckled granodiorite cobbles from the Mourne Mountains, and dark gabbro cobbles from the Cooley Mountains form designs on the outer walls of the monument. Smooth greywacke from Clogherhead in County Louth forms the inner passageway and outer kerb stones. Finally, the interior of the huge mound was built up from local gravel from the banks of the Boyne River.

Keep in mind, Newgrange was built before the invention of the wheel made it to Ireland. Archaeologists think that the rocks were carried as far as possible by boat before being loaded onto log rollers or sledges to get to their final destination.The 97 kerb stones each weigh at least a ton, and it’s estimated that Newgrange contains 200,000 tons of stone. These ancient people committed themselves to a serious labor of love!

Archaeologists debate the period of time that people used Newgrange as a spiritual and cultural site. However they agree that it was “lost” around the 5th century and then rediscovered at the turn of the 18th century when a local landowner went looking for stones to expand his buildings. Amateur “antiquarians” from around the British Isles visited the site from its rediscovery in 1699 to the 1920s. A formal archaeological survey started in 1962 and was complete in 1973. During this process, the tomb was “restored” to the way that we see it today by educated (and controversial) guesswork. The researchers found the cobbles piled down by the base of the mound and posited that they had originally been pressed into the side of the mound as a kind of retaining wall.

So who make sup this cast of characters? Distances measured in ArcMap, from a generalized geologic unit to Newgrange assuming that the builders used boats as much as possible to transport the rocks.

Quartz: Distance traveled: about 65 miles. These are the same quartz veins that I wrote about in my Glendalough post!

Gabbro: Distance traveled: about 35 miles. This is a dark coarse-grained intrusive igneous rock.  It’s the most plentiful rock in the ocean’s crust, and when found on land is associated with rift zones where continents have torn apart from each other. It has the same mineral composition as basalt (like at Giant’s Causeway) but cooled slowly underground instead of solidifying quickly above the surface. It’s mostly made of the black mineral pyroxene, with smaller amounts of white plagioclase feldspar and green olivine. This gabbro even shares the same age and source as the Giant’s Causeway – about 60 million years old, and formed when Pangaea ripped apart to form the modern Atlantic Ocean.

Granodiorite: Distance traveled: about 40 miles. This rock is very much like granite but has a different balance of the two feldspar minerals. It has more plagioclase feldspar that granite does, and so appears whiter. This contrasts strikingly with the black amphibole and pyroxene minerals in the rock, so granodiorite puts me in mind of a dalmatian’s color scheme. The other kind of feldspar, orthoclase, can add a pinker tinge to granite. The Newry Granodiorite complex crystallized in the Caledonian period – about 400 million years ago – as a byproduct of the closure  of the ancient Iapetus Sea.

Graywacke: Distance traveled: about 15 miles. This particular kind of sandstone forms in deep marine environments when undersea avalanches, called turbidity currents,  mix up all sizes of particles – silt, clay, sand, and gravel. This rock was formed during the Silurian period between 433 and 419 million years ago, and got shuffled to the surface since then.

I can only wonder what these rocks meant to Newgrange’s builders. Some thoughtful ancient travelers noted their favorite rocks around the island, and decided that they ought to be a part of their community’s treasure. I think we might have gotten along.

Granodiorite at the Mourne Mountains: http://www.mournelive.com/how-the-mournes-were-formed.htm

Gabbro on the Cooley Peninsula: http://www.3roc.net/assets/CooleyPeninsulageology.pdf