It’s a bit embarrassing that I’m publishing this almost three months after the fact, but I got distracted by the Clean Water Rule…

Hanging out with the “Frog” on the Indian Staircase trail.

There’s nothing better in the summer than leaving the land of heat, the blues, and mud for the land of rain, bluegrass, and hills! My sister and I met at Red River Gorge Geological area for a week in July to hike, camp, and climb. It rocked, despite storms that challenged the waterproofing of my tent and transformed trails into obstacle courses (geomorphology in action!). The terrain in the geological area is phenomenal – soaring arches, rock shelters big enough to swallow football fields whole, and sharp sandstone ridges. Heather spent much of the time that she was riding with me reminding me to keep my eyes on the road and off the outcrop.

Like many of the sandstones ranging from New York to Alabama, the Red’s cliffs started out as massive delta deposits of sand and gravel shed during the Carboniferous (between 360 and 296 million years ago) from the rising Appalachian Mountains. However, if their story had ended there with deposition, the area wouldn’t have nearly such good climbing or some many steep trails to take my breath away while hiking. The secret to the sharp, dissected nature of the cliffs lies in another round of uplift that gave the Appalachians a boost around 65 million year ago, creating the Cumberland Plateau in the process. Unlike the Carboniferous uplift that created the Appalachians and the raw materials for the Corbin Sandstone, the Cenozoic uplift that fractured the plateau wasn’t caused by plates crashing into each other. The later uplift was a product of the slow, persistent process of isostasy in which the elevation crust reaches equilibrium as it floats on the more liquid mantle. During the Cenozoic, sediment washed off of the Appalachians was deposited on the continental shelf. As that weight was removed from the crust over the Appalachians, the mountains started to rise to create a new equilibrium. The Cumberland Plateau rose with them.

Hard rock objects to being shoved up over a thousand feet in elevation; in this case, the Corbin Sandstone broke along long, vertical fractures in response to the stress. Those fractures became the path of least resistance for water moving through the area, so streams dissected the plateau along the neat fractures creating the steep cliffs and free-standing “chimneys” that make the Red so interesting. On a smaller scale, these cracks create aretes and cracks that give a climber  a break from the overhanging routes created where sandstone meets shale. 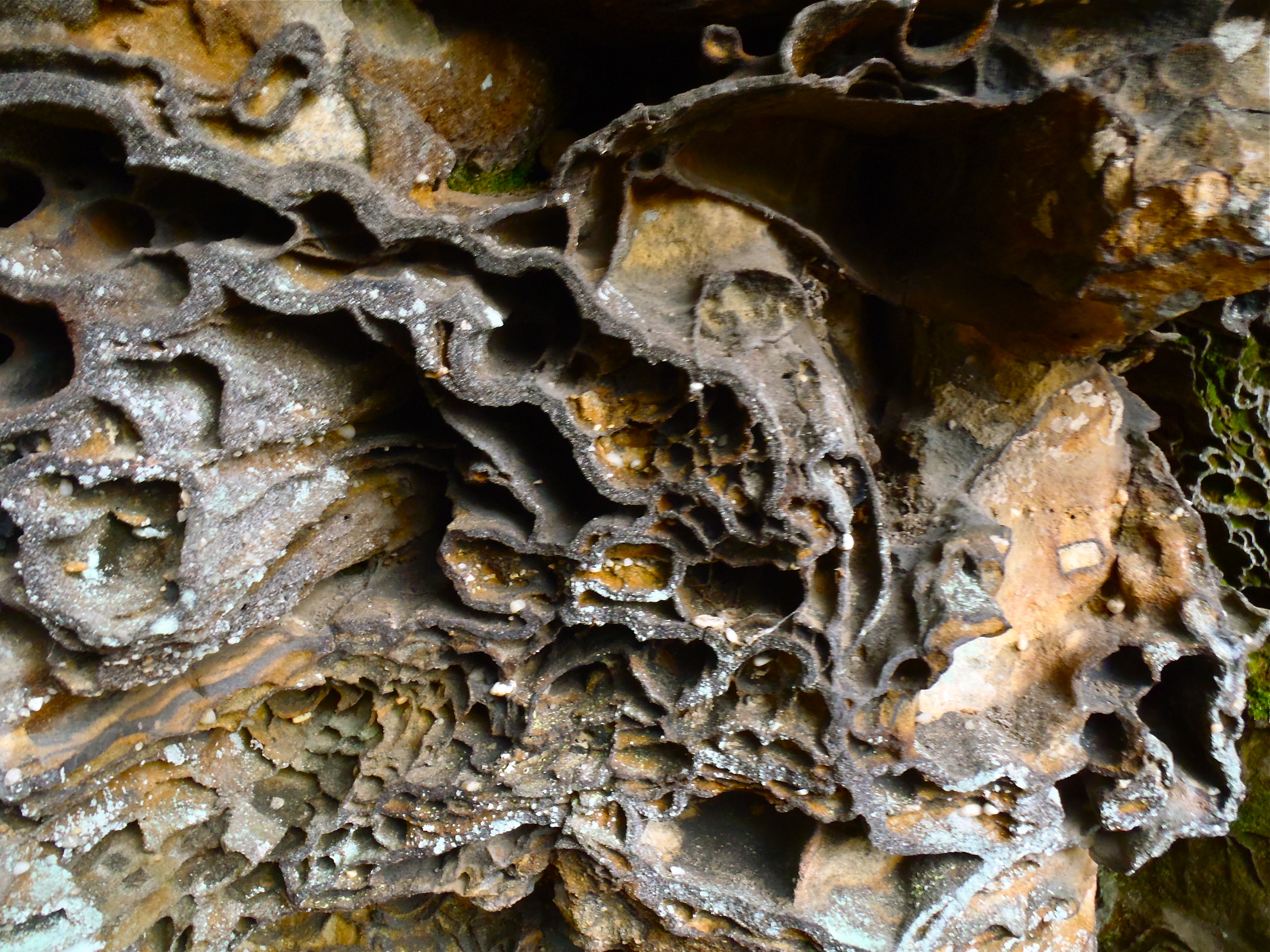 Photo copyright of Mark Wetherington, because none of mine turned out. https://www.flickr.com/photos/mvweth/8630365740/

Beside the topography, another element that catches a hiker’s eye are the weird orange or red-brown swirls on the rock. They’re cemented with tougher stuff than the surrounding rocks – iron. This structure, called Liesegang Banding, is caused by rearrangement of iron-rich minerals in the sandstone as water flows through it. Exactly why it re-deposits in such fantastic shapes is still a mystery to science. A version of the same process creates the more resistant reddish plaques in the sandstone that can create climbing holds such as jugs or underclings.

On this fun 5.8 pitch at the Bruise Brothers Wall, my left foot is on an iron-strengthened “plate” on the sandstone.

Unfortunately, nobody’s allowed to climb on arguably the best part of the park: the arches! These features are made possible by those fractures mentioned earlier in the post; when stream valleys form very close to each other along parallel fractures, they can create a narrow fin of rock. If that fin has a more resistant layer of rock along the top of it, as the less-resistant rock below wastes away due to freeze-thaw action and gravity eventually a hole forms all the way through the fin. On a geologic time frame, these are very short-lived features and will collapse in a few hundred thousand years or so.

… or six stories high and 80 feet across, like Gray’s Arch

The upshot: you should find an excuse to take a road trip to this park, whether you climb, hike, or just want someplace scenic to set up a hammock. If you don’t climb, make friends with someone who does and have them take you, because it’s definitely some of the best climbing in the country. I have friends who have spent months here and still feel like they’ve not even scraped the surface of climbable routes. It’s really the gift that keeps on giving. If you’re looking for a place to hike in the southeast that’s more than a tunnel of trees, check out the views here! The Auxier Ridge hike is like being on an island in the sky.

It was very considerate of those 300 million years of geology to create such a beautiful place.

Geology as it relates to my favorite use of the Gorge: http://www.rrgcc.org/documents/rrg-geology.pdf

Geologic history of the Appalachians: http://pubs.usgs.gov/gip/birth/birth.pdf